MUVe with Modul University! The safest and most sustainable student rideshare 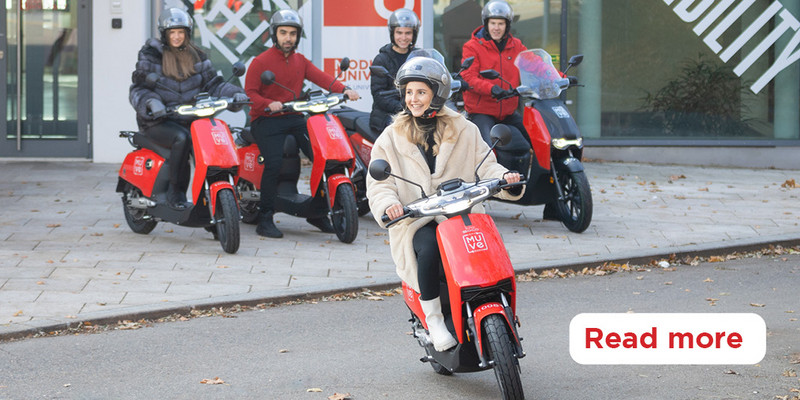 Modul University, with its leafy green campus overlooking the city of Vienna from the top of Kahlenberg, is an international private university with an excellent reputation for its study programs in the disciplines of international management, service-related industries, tourism, sustainability, data science, and the design of information systems. Not only as a study specialization, sustainability is a guiding principle for all activities at Modul University, the latest initiative being an electric rideshare service for students called MUVe Now.

The MUVe Now rideshare concept, powered by Modul University Vienna, consists of a fleet of electric mopeds in two different sizes – a smaller version for quick city trips and a larger version which can be used for making deliveries, transporting small items or city hopping with friends. These vehicles have been specially configured with a purpose-built app so they can be easily rented and controlled by the user from their smartphone. Not like the average rideshare, the applied rental model is intended to promote longer-term leasing over per-minute arrangements, which often cause city mobility concepts to be considered nuisance services by the general public. The intention behind the MUVe Now moped rental model is that a student might rent the vehicle over a period of several weeks, which will increase the proper care, usage and storage of the vehicle. The vehicles can be equipped with two batteries which can be charged at home using a normal household plug socket for extra convenience.

Another significant benefit behind the rideshare concept is that it has safety at its core: the vehicle will not power up or move until the user has put on a helmet and the can also be controlled remotely should dangerous handling or over-enthusiastic driving be detected. In this case the moped can either be slowed down or the motor can be completely disabled without the driver being able to intervene. In this way, MUVe Now not only cares for the safety of the driver, but also for those that might be sharing the road with them at any particular moment.

The MUVe Now concept will be launched for students officially on 19th May at the Modul University campus, where a full demonstration of the app will be provided including an opportunity to test drive and learn about the proper use of the mopeds. Pricing and leasing requirements will be announced in due course beforehand via the MUVe Now website. Modul University is looking forward to enabling safe and sustainable travel for its students - and in the future for tourists, delivery drivers and the general public - in the city of Vienna.