Ready…set…take off! Up close at Austrian Airlines 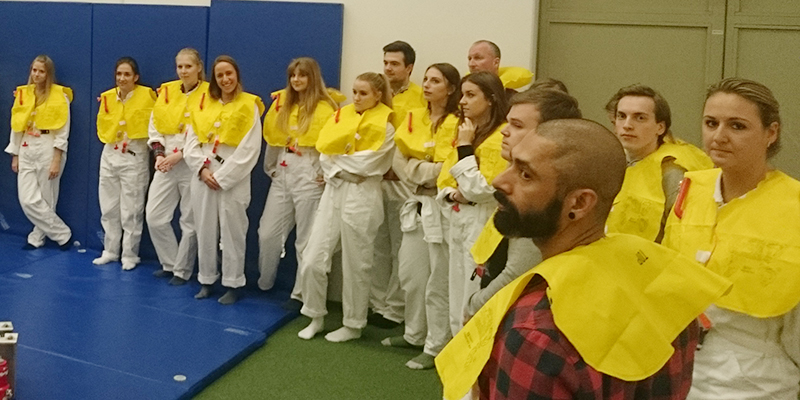 That is what a group of 20 BBA, BSc, MSc and MBA students almost did at the Austrian Airlines Training Center. The purpose of the trip was to learn about the training of the cabin crew and pilots and to experience an “emergency landing” on a mock plane. MSc student Ioana Benea shares the experience:

‘’The first part of the program was a short overview of the training that is done in the AUA center, then in the second part we were taken through almost all stations relevant for the training. One of them represented the “fire” emergency situation on board, where flight attendants have to wear a mask and handle the emergency carefully and under time pressure.

The next stop was the “water landing” emergency, where we learned about what happens and how to proceed with the raft. We then continued to the “opening the door” section, where of course we learned about how to open the doors of an airplane (“do not try this at home! … I mean on your next flight!). Before going to the “fun” part, we had a final stop at the equipment station, where each item of emergency equipment can be seen, touched and explained. The highlight of the excursion was the actual flight emergency experience. First we were sliding down from a larger aircraft 4 times – once just siting and sliding – once jumping directly out and sliding – once under time pressure – and the final one under much more time pressure. We managed to “evacuate” the airplane in 9 seconds, which is good for 20 people, considering a full aircraft should be evacuated in 90 seconds.

Finally we were on a different mock plane where we could ask the final questions we had about the training and life as a flight attendant, before having to “emergency land” on water and put our vests on and evacuate a smoking airplane. Everyone was safely evacuated and no one got hurt in the process!

“Flight crew prepare for landing … Welcome to your destination!”

We would like to thank Austrian Airlines Training Center team for making this trip possible, interesting and very enriching. We all learned how important it is to have a couple of educated passengers on board in such emergency cases, in order to facilitate the evacuation and help the flight crew.’’